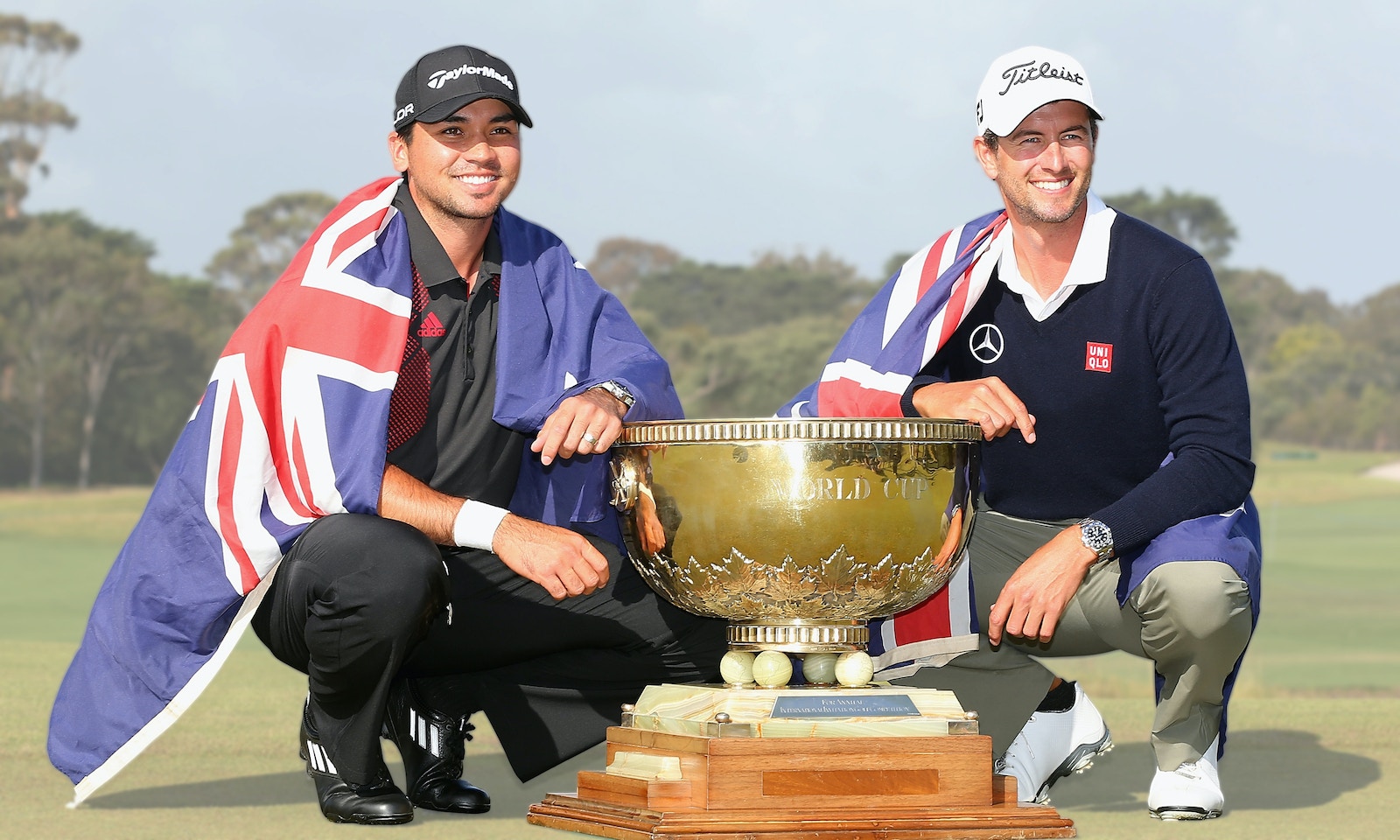 One of the few team golf tournaments played, the 2018 ISPS Handa Melbourne World Cup of Golf is a prestigious and esteemed tournament. Founded in 1953 by Canadian industrialist John Jay Hopkins, the tournament was first known as the Canada Cup until being renamed to the World Cup in 1967, and is contested by two-man teams representing their country.

The format of event has changed over the years. Starting as a 36-hole stroke play tournament with the combined score of the two-man team determining the winner, it was changed to a 72-hole stroke play tournament from 1954 to 1999. At the turn of the century, the format became alternating stroke play rounds of four-ball best-ball (each player plays their own ball and the best score is used) and alternate shot (foursomes – only one ball is played between the team of two taking alternate shots until the hole is completed). 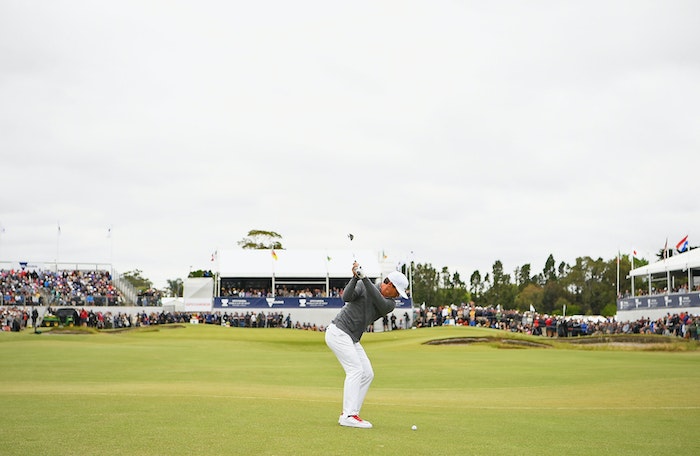 In 2018, Melbourne will be hosting its sixth overall and third straight World Cup tournament. After Royal Melbourne hosted the tournament in 1959, 1972, 1988 and 2013, Kingston Heath in 2016, The Metropolitan Golf Club now has the privilege of hosting this premium international golf event. The Metropolitan is one of the world’s best courses located in Melbourne’s well-renowned Sandbelt region. The world’s best players will be itching to test themselves on this iconic course and etch their names on the prestigious trophy.

28 countries will be represented at the 2018 ISPS Handa Melbourne World Cup of Golf, determined by the top-ranked player from each country from the Official World Golf Rankings. These top-ranked players then select a partner from the same country.

The Course – The Metropolitan Golf Course, tucked away in Melbourne’s south-eastern suburbs is one of the renowned ‘Sandbelt courses’ and widely recognised as one of the finest championship courses in Australia. Always in tremendous condition, Metropolitan has hosted 7 Australian Opens, 5 Australian PGAs and 10 other professional tournaments including the World Golf Match Play Championships. 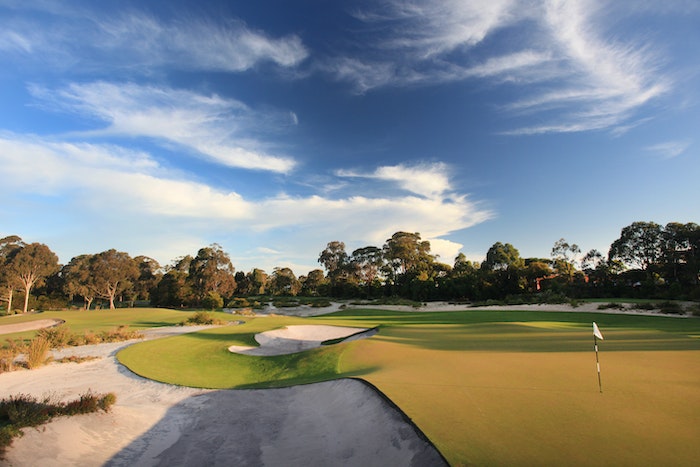 The Format – The format for the 2018 ISPA HANDA Melbourne World Cup of Golf is 72 hole stroke play. The first and third days are foursomes (alternate shot), and the second and fourth days are four-ball (best ball) play.

Foursomes (played during first and third days) – Using only one ball per team, the players take alternate shots until hole is completed. Team members take turns in teeing off on each hole, i.e. one player will take the tee shot of odd-numbered holes, and the other on even-numbered holes.

Four-ball (played during second and fourth days) – Each player plays his own ball. The team’s score on each hole is the lower of the two player’s scores. 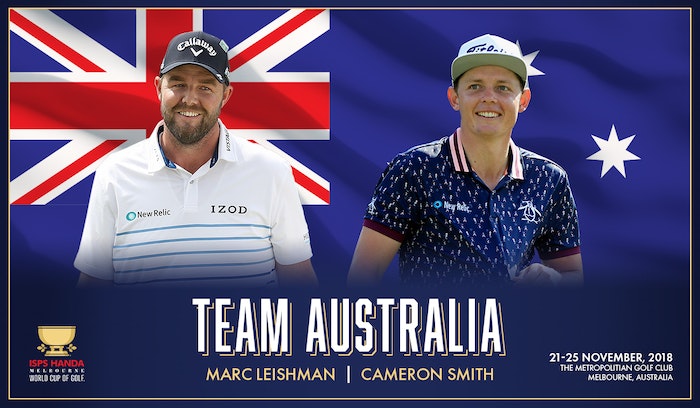 Australia – The host country will be hoping for a repeat of 2013, when they took the honours on home turf at Royal Melbourne. Victorian Mark Leishman headlines the team, choosing up-and-coming star Cameron Smith as his partner. Both players had a great 2018 season, making the season-ending Tour Championships, and performing well on the big stage. Locals will be out in force to support the Aussie team and with local knowledge on their side, they could be a force to be reckoned with. 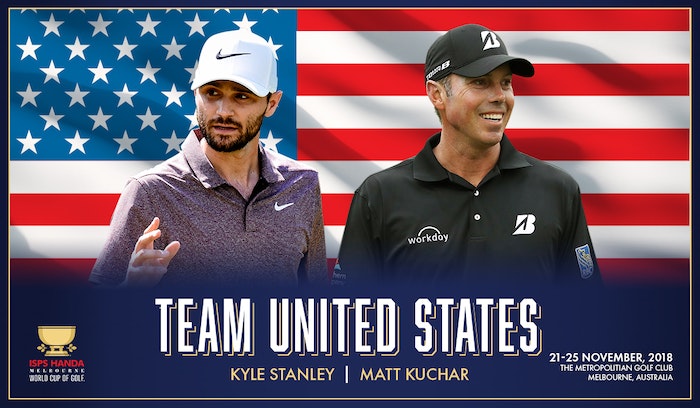 USA – Easily the most successful nation in the history of the World Cup of Golf with 24 titles, the USA team will be represented by Kyle Stanley and past champion Matt Kuchar. Stanley, a two-time winner on the PGA Tour, will be leaning on the experience Kuchar has gained over the years. Kuchar is not short of experience and success on the big stage. He has represented his country in the Ryder Cup 4 times, the Presidents Cup 4 times, World Cup of Golf twice as well as coming home with a Bronze Medal at the 2016 Olympic Games. 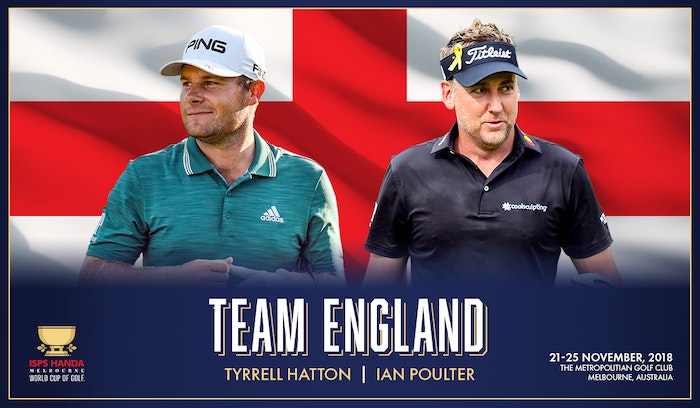 England – Ian Poulter loves the team tournament format. His Ryder Cup record is second to none and has always produced during partnership play. Joining Poulter will be his 2018 Ryder Cup teammate Tyrrell Hatton. At the time of writing, Hatton is ranked the highest of any player who will be competing at the event. An exceptional young player, England who have only won the competition twice before, will be hoping a World Cup will finally be “coming home”. 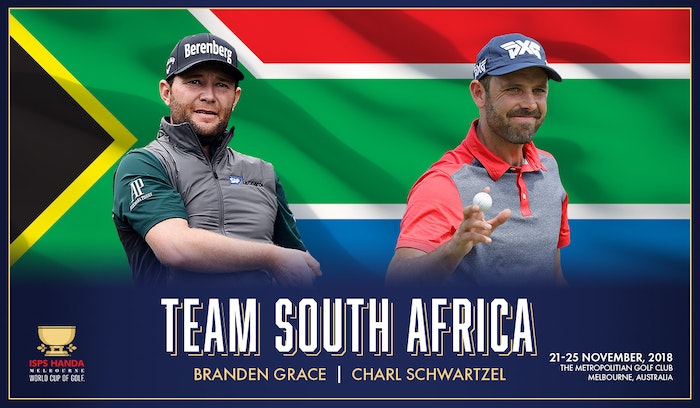 South Africa – Brandon Grace and past Masters champion Charl Schwartzel will be a pair to watch. Two extremely accomplished golfers, South Africa could be taking home their 6th World Cup of Golf title that will take them to outright second on the all-time winners list (currently tied with Australia). Grace and Schwartzel, who have been main stayers on the PGA Tour, have racked up 27 professional wins between them, will definitely be a pair to keep an eye on during the tournament. 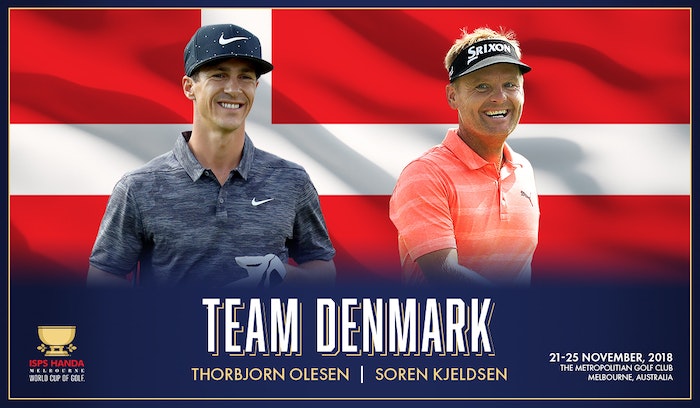 Denmark – The reigning champions will once again be one of the major contenders. Producing excellent golf at Kingston Heath in 2016, the Danes were dominant winners after a second round 60 in the four-ball format. Winning duo Thorbjorn Olesen and Soren Kjeldsen return to defend their title and will be hoping their past success together will bring even more triumph. 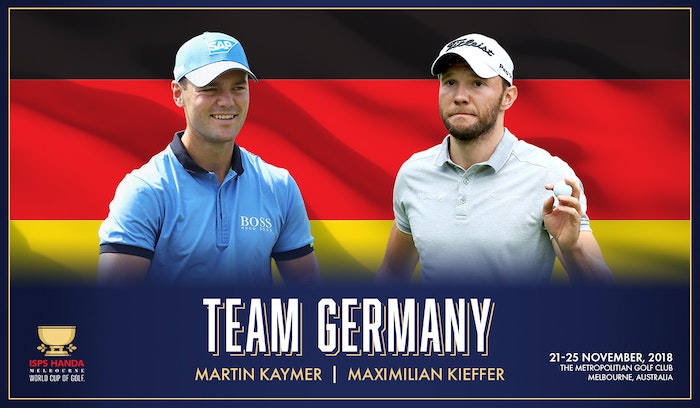 Germany – Perhaps a dark horse in the tournament, Germany could fly under the radar to surprise a few. Former world number 1, Martin Kaymer has paired up with Maximillian Kieffer, a youngster currently plying his trade on the European Tour. Kaymer, a 2-time major champion, and experienced big tournament player will provide the backbone of team while Kieffer could come out and turn heads. If the Germans come out firing, don’t say I told you so.

How to Experience the 2018 World Cup of Golf 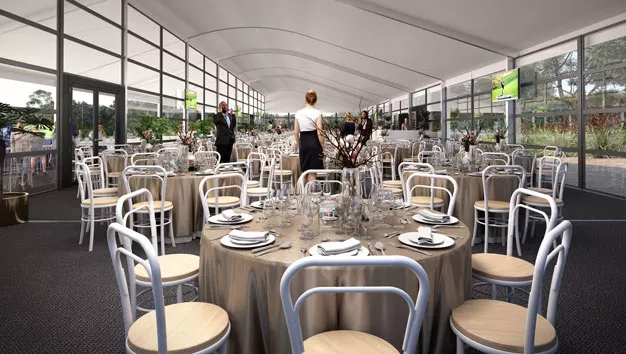 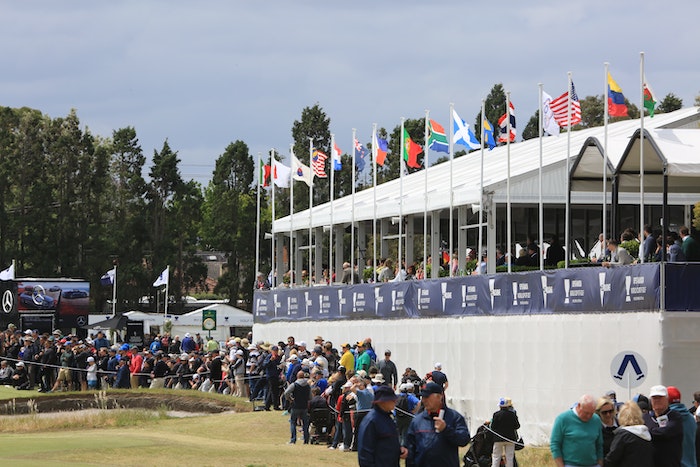 The Weekender Package – The Weekender package gives you access to the Federation Club on Saturday & Sunday. Enjoy reserved seating the in prestigious suite overlooking the 18th fairway. With a gourmet lunch and roaming canapés throughout the day plus complimentary beer and wine, there is no better place to watch the world best golfers. 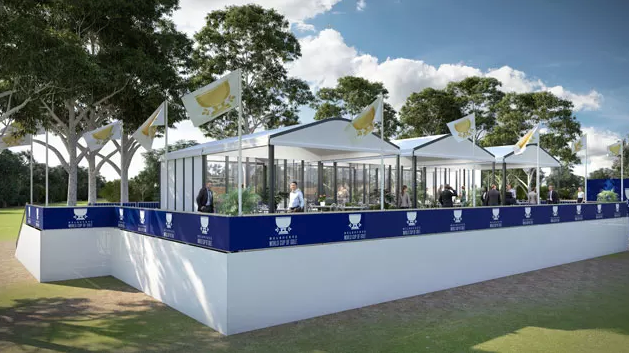 Sandbelt Suite – Overlooking the 18th green, your guest will be provided with elevated views from tee to green in the Sandbelt Suite. Located in the heart of the action, this is a unique opportunity to witness the world’s best golfers as they compete for their nation and the pride of their country. 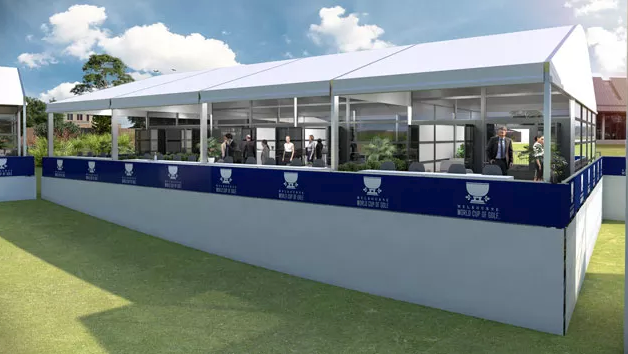 Champions Suite – The Champions’ Suites provide the ultimate in private entertaining for your most valued clients. These suites are perfectly positioned and elevated to overlook the 18th green at The Metropolitan Golf Club with a capacity for 60 guests per day.

TIXSTAR is your destination for premium sports & entertaining experiences – find the best range of 2018 ISPS Handa Melbourne World Cup of Golf experiences all in one place.

Our customer service team is on hand to help you find the best experience for any occasion – Phone (03) 9257 3255 or email info@tixstar.com.au